After it had happened, no one could really find a convincing explanation for it all. Why did a local art museum issue its call and suddenly open its doors to all the city’s asylum seekers? How did such a small, local action then connect to all sorts of gatherings across the European continent? And why did the corporations of the day not see it coming? After all, consumer intelligence was their speciality, and this was nothing if not a free choice revolt. Each person seemed to join by themselves, perhaps out of some unfathomable herd instinct, but nevertheless as individuals. And it wasn’t really true that they joined anything anyway. They just went to the museums, kunsthallen, artist spaces – art venues of all sorts and in every major city. They sat, looked around, slowly started to speak to each other and enjoyed it all enough to keep coming back. Soon, the museums started to respond – organising meetings and commissioning short term projects as a result, inviting the press and asking artists and others to turn the tables on cynical journalists. The art mausoleums that had slumbered for so long suddenly started to live. Impromptu activities were welcomed and the rules of engagement with art were changed whenever necessary. Museum workers even started to talk about the need for unconditional hospitality and visitors responded.

Strangely, the action spread across central Europe. For once, our disempowered citizens seem to shrug off their apathy and find a voice beyond the reach of administrative control. Of course, everything stayed on the local level, but a new spark was ignited almost daily and every week a new city fell into line. The speed of the change produced problems, most of which we still have today. When people failed to turn up for work, production initially fell by over 70%. But gradually provisional solutions were found, priorities were changed and people drifted back to work for two or three days a week anyway, just to make enough money to carry on. The corporations issued threats, sackings, even appealed for military action but there were no laws against public cultural attendance and the smart entrepreneurs quickly adjusted to the new lower level economy.

Now, it simply goes on like this. The museums are the new public forums, the remaining party politicians try to go there to make there point but mostly production and distribution take care of themselves, administered by the few who still take pleasure in the treadmill of wealth creation. The purpose of meeting seems to be changing. No longer about protest, it’s now about something closer to the old, perhaps mythical, idea of the agora. Exchange simply happens for its own sake and for the pleasure of the result.

Maybe could say everyone’s an artist now, except hardly anybody uses that term, preferring other words, usually adapted from local slang still surviving in our international patois. Why did it all happen? If you ask me it’s pretty straightforward. It happened because there wasn’t anything else to do. We’d exhausted every other option and this was the one place left worth trying. Funny, I guess, but I don’t know why we never thought of it before. 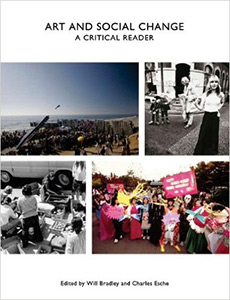