Imagine a communal body defined solely by aesthetic criteria, indifferent to marketing specialists and cool hunters, something resembling a desiring collective – a machine whose solidarity emerges from a constantly materializing sensual interaction with everyday life. The very possibility of such a cooperative being haunts our bedraggled capitalist present, not because it represents what is utterly unthinkable, but because the socialization of labor by capital has made it so palpable.

A recent New York Times article entitled “Outside the Citadel, Social Practice Art is Intended to Nurture” puzzled over how institutions can teach contemporary art that blurs the lines between “object making, performance, political activism, community organizing, environmentalism and investigative journalism.” In doing so this work allegedly pushes contemporary art close to the breaking point. The piece goes on to say that although leading museums have largely ignored this so-called social practice art,

“many smaller art institutions see it as a new frontier for a movement whose roots stretch back to the 1960s but has picked up fervor through Occupy Wall Street and the rise of social activism among young artists.”

Of course this is not the first time such socially engaged work has flourished on the margins of the art world only to gradually, or rather I should say selectively turn up first in small and then increasingly more established cultural institutions.

It starts like this. The initially turbulent reemergence of political art, activist art, interventionist art, collectivized art, socially engaged/ relational/ participatory/ dialogical art. Some see it as a return of concerns dating back to the early years of the avant-garde, others as the resurgence of 1968, which has in many ways grown just as distant as the turn of the last Century I supposed. Still others perceive it as little more than an artistic genre, or a concept useful for organizing the next exhibition, or perhaps freshening-up this or that tired museum collection. But even in my lifetime I recall the late 1980s when “political art” unexpectedly became hip. It was featured in the Museum of Modern Art’s exhibition Committed To Print in 1988, the Dia Art Foundation’s projects with Martha Rosler and Group Material in Soho at about the same time, and a few year later at the Whitney Biennial of 1993 which was described by some as a pleasureless return to cultural Stalinism, although to many of us on the Left it was seen as an anemic attempt to symbolically represent the politicization of artists starting roughly in the late 1960s but continuing into the early 1980s. (And probably it is not a coincidence that some of this work from the 1993 Whitney Biennial is currently on view at the New Museum downtown).

But we know this kind of cultural turbulence “from below” is not aimed at establishing yet another aesthetic category. And we know its resurgence is not simply a case of mere repetition, at least not in any familiar sense of that word.

Especially today, because thanks to an ever more accessible technology for manufacturing, documenting, distributing, as well as pilfering, revamping, and fictionalizing information, a previously obscured realm of cultural productivity has begun to brighten, materialize, and sometimes even cohere into thickening networks of exchange that bristle with a desire for independence not only from prevailing market forces, but also from mainstream art institutions. We might describe this shift as the sudden unblocking of what Alexander Kluge and Oscar Negt called a counter public sphere: the defensive production of fantasy generated in response to the alienating conditions of capitalism. Or we could refer to this process as the illumination of a previously shadowed realm of informal, everyday imagination from “below,” a phenomenon I sometimes describe as art’s missing mass or “dark matter.” Still, this visualization not only exposes pent-up desires, it also releases less savory forms of anger and resentment all the while throwing a light on the actual socialized conditions of labor, conditions that have become essential for all forms of artistic production today. And this inescapable visualization of social production comes at a moment when the usual precariousness of artists had reached a new level of intensity.

As is widely known even professional artists -that is to say those with credentials such as BFA or MFA – typically work two or three non-art related jobs in order to maintain a modest level of income. On top of this are increasingly unaffordable health care expenses and reasonable studio space rental has been pushed to the far-off urban margins by gentrification. Add to this is a scarcity not only of full-time teaching positions, but also part time adjunct work. Sociologist Pierre-Michel Menger writing before the recent global economic crisis reported that poverty rates amongst artists in the United States were “higher than those for all other professional and technical workers.“2Pierre-Michel Menger "Artistic Labor Markets and Careers," in Review of Sociology, Vol. 25. (1999), pp. 541-574. Since 2008 this extreme precariousness amongst artists is less and confined to the United States.

Compounding this bleak situation is the ever-greater waves of graduating artists from schools and universities who augment an already over-saturated industry with a glut of artists described by Carol Duncan in 1984 as “the normal condition of the art market.” Shortly before the global financial collapse a 2005 Rand Corporation study found that:

“The number of artists in the visual arts has been increasing (as it has in the other arts disciplines), and their backgrounds have become more diverse. At the same time, however, the hierarchy among artists, always evident, appears to have become increasingly stratified, as has their earnings prospects. At the top are the few “superstar” artists whose work is sold internationally for hundreds of thousands and occasionally millions of dollars.”

In a nutshell: Risk Rules!

Nevertheless the appearance of social production within the world of high culture has unsettled the gatekeepers of the artistic canon. They eyeball it cautiously, hoping it is nothing but a short-lived detour from business as usual. But their greatest concern is not how to manage some deeply subversive or radical content. Instead it is the very appearance of this social production itself that is disturbing because it directs our attention towards an ellipsis within the dominant cultural narrative: a point of uncertainty in a story where no such doubt is supposed to exist. It raises questions. Where did all these artists come from? Who is producing them? What role do they play in the reproduction of the art world?

But when patience wears thin and strategic acts of evasion fail the mainstream art world devises ways of filtering out the less manageable elements of this challenging tumult, all the while dropping a trail of breadcrumbs to attract those bits they believe they can safely work with. These crumbs lead into museums and academic programs and guide certain artists towards whatever miniscule pots of public funding have not been completely eliminated by the culture wars. It is a process of seduction and discipline that reads like pulp fiction.

And I have to be honest here and admit that this process of seduction and discipline also involves the organized study of Social Practice Art as an academic field. I prefaced this by saying “to be honest,” because there is now a social practice curriculum that I am involved with where I teach at Queens College. It is just one of a handful of such initiatives in the US including at the California College of Art in San Francisco, at Portland State, and at Otis Institute although others are rumored to be in the works (including here at NYU). These programs differ somewhat in their specific emphasis but taken together they cover every shade of socially engaged art including guerrilla architecture, urban interventions, community-based-public art, interdisciplinary design, post-studio research, green “sustainable” culture, and so forth. And because networked cultural production is not bound to traditional institutional spaces, social practice art appears free to engage with, and in turn be engaged by many potential suitors that range from political activists to representatives of the so-called creative industries – that new economic engine, which neoliberals claim will save post-industrial capitalism.

In other words the very processes of capital are forcing a previously hidden social production into view, an attempting to bring it under control. And with this increasing visibility comes new possibilities, as well as risks. We are it seems experiencing a moment in which artistic production is once again at the center of a struggle over definitions and possibilities not only about what constitutes a genuine avant- garde practice, but about the very nature of labor, democracy, and political agency. Just as before in the late 1980s the question of the moment is when do the contradictions that inevitably crop up around any oppositional cultural practice begin to slide into a deeper complicity with what they struggle to resist?

Once again, imagine a communal body defined solely by aesthetic criteria, indifferent to marketing specialists and cool hunters, something resembling a desiring collective – a machine whose solidarity resists appropriation by way of a constantly materializing sensual interaction with life. The very possibility of such a cooperative being haunts us today not because it is utterly unthinkable, but because the socialization of labor by capital has brought it so close. Meanwhile, the system’s recent collapse makes us desperate. It puts everything and everyone at risk. Nurturing solutions are hard to resist and to some degree necessary. Flirtation with power is unavoidable. And yet notwithstanding whatever sort of love affair we once had with capitalism the time has come to break it off.

Gregory Sholette is a New York – based artist and writer whose recent art projects include “Our Barricades” at Station Independent Gallery, and “Imaginary Archive” at Las Kurbas Center, Kyiv, Ukraine, and whose recent publications include “It’s The Political Economy, Stupid,” co-edited with Oliver Ressler, (Pluto Press, 2013) and “Dark Matter: Art and Politics in an Age of Enterprise Culture,” (Pluto Press, 2011). A graduate of the Whitney Independent Studies Program in Critical Theory (1996), he received his MFA from the University of San Diego (1995), and BFA from The Cooper Union (1979), and served as a Board Member of the College Art Association (1999-2004). Sholette was a founding member of the artists’ collectives Political Art Documentation/Distribution (PAD/D: 1980-1988), and REPOhistory (1989-2000), remaining active today with Gulf Labor Coalition as well as serving on the Curriculum Committee of Home WorkSpace Beirut, Lebanon. Associate Faculty for the Art, Design and the Public Domain program of Harvard University’s Graduate School of Design, he is an Associate Professor in the Queens College CUNY Art Department where he co-developed and teaches in its new MFA concentration: Social Practice Queens 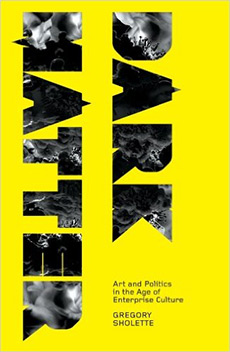