“The time is ripe for a new women-centered feminist health care movement.”

Many knowledge systems and practices intersect on this biotech frontier: Visualization and computing technologies, science, religion, philosophy, ethics, aesthetics, feminist and post-colonial theory, medicine, and genetic research intertwine, clash, and collide in ways we have not previously experienced. Whole new medical specialties and techniques are being created and deployed experimentally.

The complexity and speed with which this Second Genesis-a phrase employed by Jeremy Rifkin in The Biotech Century to denote the new genetic creation— is being created is almost beyond our grasp and understanding. Yet there is very little public debate or critical analysis that is actively engaging with the momentous issues being raised by the new bio sciences. Because the genetically altered creatures and entities introduce irrevocable changes to currently existing life forms and ecosystems, it is urgent that the debate become far more public and informed. Each one of us is implicated because our environment and food supply are being radically altered; each of us is challenged in different ways by these new conditions to activate our creative and social imaginations.

Artists operate in the field of representations in social, political, and cultural life. They are working and researching across disciplines-most importantly today they are collaborating with the hot new biological sciences of genetics and molecular biology. The approaches artists are taking to biotech are very different. Some, like Eduardo Kac, are exploring this area without mounting an explicit critique and thus their work often normalizes and validates experimental genetic engineering. Many are not really critical of science and are not activists, but are more interested in exploiting daring new possibilities for their own art work. Increasingly however, many artists are looking for ways of making activism their cultural work. By bringing together different research fields and working with scientists and practitioners in many disciplines, some artists are making consciousness raising performances and activist, participatory art works which expand public thinking, and dialog about the biotech revolution. Artists’ hands-on prophetic and visionary images and models can perhaps help influence the ways in which bio technologies are developed and deployed for better or for worse.

History: The Feminist Women’s Health Movement in the US

I am interested in how feminist practice has often combined art, activism, and social practice. To illustrate, I want to use the example of the Feminist Women’s Health Movement in the US.

In the 70s feminist activists staged an all-out rebellion against the institutions of medicine. They attacked the heart of the bastion of patriarchal authority which had over the centuries wrested away from women the proto medical practices of healing, midwifery, herbal knowledge, and various bodily practices such as poultices, compresses, baths, pelvic massage, bone setting, wound cleansing and suture, pain relief, and the like.

The Feminist Women’s Health Movement of the 70s was an unprecedented moment when women not only researched and theorized the structures of patriarchal authority which had oppressed them and deprived them of their history, but they also actively built empowering alternative structures of woman-centered medical and sexual knowledge, health care, counseling, education and treatment by and for women. By the late 70s there was a thriving network of Feminist health clinics throughout the country, which offered women of all classes, ages, races, sexual choices, and economic backgrounds, the revolutionary “menstrual extraction” method of early abortion; pelvic self-examination and group pelvic examination; many methods of contraception; “natural” and mid-wife assisted childbirth; reproductive counseling and family planning; masturbation, orgasm and sexuality workshops, and the like. Feminist artists and activists often worked in these clinics and disseminated new images of female sexuality and anatomy in exhibitions, self-help workshops, and public flyers. It was a stellar example of the theory/practice conjunction of the signal feminist slogan of the 70’s “the personal is the political.” The Bible of the FWHM was the famous “Our Bodies, Ourselves”, first published in 1971 by the Boston Women’s Health Collective.

The Feminist Health Movement was very successful in its influence for change in the treatment of women in many traditional health centers in the US. Smart medical officials recognized that more women-friendly services would lure women to their institutions. While one can only be glad of any women-friendly gestures from institutions, one cannot lose sight of the important question of who is benefiting from this most, and point out that the medical establishment (I refuse to use the word community) has not reciprocated what it gained from the FWHM by, for example, helping to fund and assist alternative clinics for women in especially needy localities, or putting feminists on their decision making boards, or founding comprehensive care centers for women’s health.

To the great loss of women everywhere, there has been an erosion of the activist women’s health movement just at the moment when new bio genetic, medical, reproductive and microsurgical technologies are precipitating an explosion of the medicalization of women’s bodies and biological processes. Currently, all areas of the female life cycle have been re-colonized and staked out as medical territory.

A new era of medicalization of women’s bodies began in the late 70s with the rise of intensive research in genetics and biomedical technologies linked to sophisticated new visualization and digital information technologies which together made new reproductive technologies (NRT) or as they are now called, Assisted or Advanced Reproductive Technologies (ART), possible. ART’s are a powerful political and socio/economic instrument of control of women’s bodies, particularly of their reproductive functions; and they have been developed as a lucrative private enterprise by a capitalist medical consumer market to those who have the resources to pay for these procedures.

In the early 1980s feminist biology professor Ruth Hubbard warned the American Association for the Advancement of Science about the NRT’s which she felt had not been tested enough, and she was also concerned that InVitro fertilization “required extremely costly and prolonged experimentation with highly skilled professionals and expensive equipment ‘distorting our health priorities and funneling scarce resources into a questionable effort.’” Neither Hubbard’s warnings, nor those of many other feminist biologists, theorists, gynecologists, health workers, and sociologists, have prevented full steam ahead developments which have actualized many of the procedures only speculated about in the 80s. This has been achieved almost exclusively through private funding from fees of willing clients who have given entrepreneurial fertility doctors and genetic scientists unrestricted access to the innermost molecular and physical structures of their bodies as a eugenic experimental theatre; and this has helped to naturalize the idea that creating a child by any means possible is a right which can be exercised by any individual in any way he/she sees fit, without regard to the threats these procedures might pose to the genetic welfare of their offspring, to the germ lines of future generations, to health and environmental resources; and to a just human social development for those who have no access to the range of choices ART presents.

How did this happen so smoothly and seamlessly with so little resistance from the general public, and from feminists, for that matter? A major reason has already been mentioned: the fact that ART is conducted almost entirely in the private, “elective” medico/consumer realm. Another, is the compelling ideology of consumer choice and desire. Since it is now technologically possible to choose to improve one’s genetic success and that of their offspring through purchase of ART technologies, a compelling new desire has been created. Many people do not understand how their “individual choices” are fueling this flesh machine. Propelled by new eugenic consciousness and consumer marketing, this machine has opened the possibility for calculatedly and permanently altering the diversity of human germ lines. The exciting adventure of re-engineering the human race from the genes up is presented as a solution to the tragic personal “medical problem” of infertility; and those who question and critique these procedures are made to feel churlish indeed.

The example of the entrepreneurial development of ART is only one of the many new flesh frontiers proliferating in the medicalization of women’s bodies. It was chosen as paradigmatic example by the cyberfeminist collective subRosa to call
attention to how women’s bodies have become the sites of new rationalized and eugenic bio genetic reproductive and medical procedures which represent an even greater and more subtle colonization of women’s bodies than ever before.

(We want to show you some of our larger performative project: Sex and Gender in the Biotech Century as an example of the combination of art and activism responding to biotechnology which subRosa is trying to practice)

SubRosa believes that resistance, critique, and activating the public to understand the processes and implications of advanced reprogenetic technologies are vitally important. As cyberfeminists and artists we are using the framework of participatory performance as an information theatre of pedagogical art which models various tactics for intervening and commenting on the seductive representations of the flesh machine. The powerful desire for rational control over non-rational life forces must be countered and de-constructed. Scientific representations promising genetic success, reproductive enhancement, and immortality must be de-coded and processed through a corrective lens which will reveal their hidden distortions and will to power. Let’s turn the speculum back on its creator!

SubRosa hopes to develop its public information theatre to dispute and disrupt the unquestioned authority of private ART theatres-though this will mean operating outside the art world. While subRosa is not anti-technology it does believe that some technologies should not be further deployed until far more testing of long-term biological and environmental consequences has taken place. By informing themselves about the reprogenetic sciences, deploying their knowledge and expertise, withholding their bodies and body parts, refusing to act as self-interested individuals and organizing in solidarity, women scientists, doctors, nurses, educators, artists, data entry workers, day care workers, computer scientists, ecologists, nutritionists, etc. could take the lead in shaping ART’s future development and use. It seems reasonable to demand that such life-altering technologies can only be employed under the scrutiny of full public information disclosure, and a thorough understanding, and debate regarding their implications and consequences. subRosa’s tactical works are aimed at helping to initiate this debate. SubRosa also wants to join other groups to issue a call for complete disclosure of all commercial interests and involvement of biotech and drug companies in scientific R and D of genetically altered life-forms.

Over this weekend we hope to engage in discussions of some of the urgent health care issues facing women in Canada and the US today. We want to initiate an open ended exploration of cross-disciplinary projects between artists, activists, and scientific/medical practitioners and health officials. Following are some of the most important issues we might address: 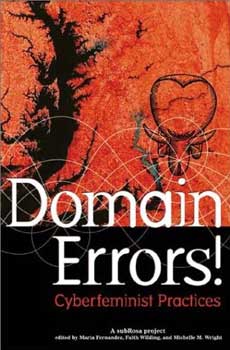