WEIRD DANCING IN ALL-NIGHT computer-banking lobbies. Unauthorized pyrotechnic displays. Land-art, earth-works as bizarre alien artifacts strewn in State Parks. Burglarize houses but instead of stealing, leave Poetic-Terrorist objects. Kidnap someone & make them happy. Pick someone at random & convince them they’re the heir to an enormous, useless & amazing fortune—say 5000 square miles of Antarctica, or an aging circus elephant, or an orphanage in Bombay, or a collection of alchemical mss. Later they will come to realize that for a few moments they believed in something extraordinary, & will perhaps be driven as a result to seek out some more intense mode of existence.

Bolt up brass commemorative plaques in places (public or private) where you have experienced a revelation or had a particularly fulfilling sexual experience, etc.

Organize a strike in your school or workplace on the grounds that it does not satisfy your need for indolence & spiritual beauty.

The audience reaction or aesthetic-shock produced by PT ought to be at least as strong as the emotion of terror— powerful disgust, sexual arousal, superstitious awe, sudden intuitive breakthrough, dada-esque angst—no matter whether the PT is aimed at one person or many, no matter whether it is "signed" or anonymous, if it does not change someone’s life (aside from the artist) it fails.

PT is an act in a Theater of Cruelty which has no stage, no rows of seats, no tickets & no walls. In order to work at all, PT must categorically be divorced from all conventional structures for art consumption (galleries, publications, media). Even the guerilla Situationist tactics of street theater are perhaps too well known & expected now.

An exquisite seduction carried out not only in the cause of mutual satisfaction but also as a conscious act in a deliberately beautiful life—may be the ultimate PT. The PTerrorist behaves like a confidence-trickster whose aim is not money but CHANGE.

Don’t do PT for other artists, do it for people who will not realize (at least for a few moments) that what you have done is art. Avoid recognizable art-categories, avoid politics, don’t stick around to argue, don’t be sentimental; be ruthless, take risks, vandalize only what must be defaced, do something children will remember all their lives—but don’t be spontaneous unless the PT Muse has possessed you.

Dress up. Leave a false name. Be legendary. The best PT is against the law, but don’t get caught. Art as crime; crime as art. 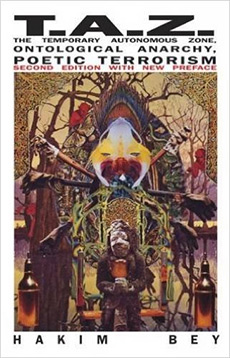