Describes a design for a graphical landscape approach to creating a living archive for online conversation; discusses the questions this work addresses and the design approach taken.

People think spatially (Lakoff and Johnson 1980). Our basic orientation in the world – up, down, behind, in front – provides a foundation for our way of thinking; not only for how we think of space, but of abstract concepts as well. We can see this in the metaphors used to describe and organize online discussions: we call them conversation spaces or environments, there are chat rooms etc. Yet most conversation interfaces use space quite minimally and linearly, a legacy of the sequential necessity of the early ascii character display. Today there is no technological reason why online conversations should not be conducted within a more dimensional setting; it is only the force of habit that limits them to linear displays.

This paper describes a design for a graphical interface for threaded conversation that uses space to enrich interaction. There are, of course, many possible solutions to this problem; the goal of this paper is to describe one such design as a starting point for understanding and critiquing spatial approaches to conversational interfaces.

Real world landscapes and situations are complex and cluttered. We find order in the chaos, meaning through patterns. Most of today’s conversation interfaces are relatively minimalist; the look is clean, but sparse. One goal of the landscape approach is to allow for the organic and emergent development of complex yet legible patterns.

Imagine seeing a bird’s eye view of a varied and hilly terrain. As you move from place to place, the scenery changes – the dominant hues, the texture of the ground, and the height of the hills varies. Activity is visible in different areas, and one can see moving forms and bursts of light. Yet, this is not a geographical space; it is an information space, an interactive visualization of a large scale and persistent set of conversations.

Approaching the “ground”, one sees that it is composed of numerous text documents, of various sizes and tones. Some are pristine, while others have been marked and commented on by previous readers. Traversable threads connect most documents to others. Preceding documents are behind the current one, and postings from long ago may lie deep within a mountain (but travel through the layers is easy).

Documents are subject to forces that cause the least read and lowest rated ones to shrink and sink, while the most useful – or interestingly provocative – ones remain prominent. The terrain of the information space is shaped by the activity of the users – their written contributions, their ratings, and their patterns of reading. The display thus provides a visceral sense of the history of the discussions, showing what topics have amassed deep discussions, which ones have spread by inspiring numerous related discussions. The geography of each section of the space is unique, shaped by its individual history.

The documents vary in their color, shape and size; these features are representative of its content, the reputation of its author, the comments and ratings given to it by readers, how recently it was read, etc. Brightness, for example, shows recentness, and thus one can see where there is current activity. There are bright flashes as new postings are added, and new documents are quite bright, slowly fading over hours or days.

In the words of the great urban sociologist, William Whyte, “What attracts people the most, it would appear, is other people” The presence of other people, the sense of which is notably absent in most asynchronous conversation interfaces, is integral to this project. Users are visible as forms moving across the landscape. This allows the participants to have the sense of being in a populated space.

The form that other users take is part of the reputation system: new users are blandly shaped and colored., while further participation shapes and colors their form. One can thus quickly recognize long-term participants, highly rated posters, etc. The design of this avatar-as-portrait is an important and nuanced task. Should all of a person’s postings be accessible from their portrait? All their ratings? by others? about others? What sort of form is informative yet not overly humanoid? The challenge is increased because the task encourages anthropomorphizing: one must, for instance, be careful not to make a shape that is supposed to show prolificness appear simply fat.

Ephemeral, synchronous messaging is available; this makes explicit the distinction between the persistence of the asynchronous postings and commentary, and the disappearing words of the instant message. It also makes explicit the notion of words as landscape: users may explore the space, finding existing material of interest, and then meet others in the same space, who they converse with, using the texts they are amongst as their initial common ground.

My students and I have created several projects that explore related ideas. Chat Circles is a synchronous graphical chat system in which the system administrators can place images and texts in the chat space to serve as conversational foci: both the participants and these texts and images have a “hearing range” which means that one must be physically near a person to converse or an image to view. Users’ movements leave trails in the space, and we have studied the effect of such trails on how people perceive and establish presence. (Donath and Viegas 2002) Loom is a series of visualization of Usenet newsgroups that explores both what information is most useful to depict and what vocabulary to use to depict it. Sociokinetics explored of the use of motion as an information-bearing dimension for depicting conversational dynamics.

We have explored geological metaphors in Artifacts of the Presence Era (Viégas et al. 2004)and Contact Mountain; I discuss some related issues in (Donath 2002)

We have explored the question of how to create meaningful depictions of individuals in several projects. Most relevant is Anthropomorphs (Perry 2004)

Relevant work done elsewhere includes Marc Smith’s Netscan, (Smith and Fiore 2001) which proposes a spatial layout for an overview of a large conversation space, David Small’s Navigating Large Bodies of Text (Small 1996)which explores some novel and beautiful techniques for presenting large amounts of text on a relatively small screen, as well as various approaches to moderated and rated conversation such as Slashdot, etc.

The key problem in evaluating such a project is knowing what questions to ask. It is not simply a matter of testing efficiency – did you find something faster – but of aesthetics, attraction, and understanding. The evaluation we will do for this design is meant to find out such things as:

The big design challenge here is the perennial pair of social visualization questions: what data should be visualized? how should it be depicted? It is beyond the scope of a 2 page paper to discuss these issues; see (Donath 2002) for further discussion.

It is also useful to think about who will make these choices. For many conversation spaces, the hosting company will do so. For others, design-by-users would be appropriate.

This view provides an overview of the different topic areas. Similar “hills” indicates amount of material, brightness shows recency, and color and gather in different areas, analogous to traditional newsgroups or channels.
The process by which related areas are grouped together is a key research question. One type of layout is exemplified by Smith’s Netscan, a 2D treemap representation of a newsgroup hierarchy; another is the WEBSOM mapping technique which groups related documents into 2d space.. Meaningful proximity can be entirely automatic or include user placement.

Here we see activity, of people who are currently present and of documents that have been recently added or modified. Recent documents are brighter; this glow lasts for hours or days, depending on the rate of contributions. 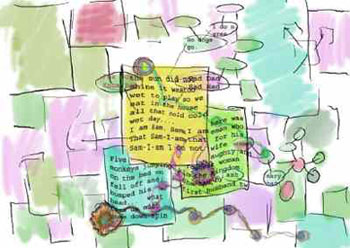 In this sketch, three people are shown in the visible discussion; they are the circular objects with different patterns that derive from their various interaction patterns and reputation. In actual implementation, the hosting site would determine the details of how people are represented, including the degree to which one controlled one’s own depiction. Trails mark where they have been. We have used this sort of “footprint” in Chat Circles; see also projects such as Chalmers et al’s browsing visualizations.
The documents show signs of how much and how recently they have been read and/or remarked upon. A reply can be to a specific part of the document or the entirety. Faint outlines show the presence of comments that are below viewing threshold. The texts are in layers, through which the users navigate (See Small 1996 on transparency and Bederson and Hollan 1994 on zooming interfaces)

Image 4. Chat Circles and the Talmud. Chat Circles is an example of an interface that shows user paths; David Small’s Talmud uses transparency to help users navigate through a large body of text and commentary.

Judith Donath is an Associate Professor at the MIT Media Lab, where she directs the Sociable Media research group. Her work focuses on the social side of computing, synthesizing knowledge from fields such as graphic design, urban studies and cognitive science to build innovative interfaces for online communities and virtual identities. She is known internationally for pioneering research in social visualization, interface design, and computer mediated interaction. She created several of the early social applications for the web, including the first postcard service (“The Electric Postcard”), the first interactive juried art show (“Portraits in Cyberspace”) and an early large-scale web event (“A Day in the Life of Cyberspace”). Her work has been exhibited at the Institute for Contemporary Art in Boston and in several New York galleries; she was the director of “Id/Entity”, a collaborative exhibit of installations examining how science and technology’ are transforming portraiture. Her current research focuses on creating expressive visualizations of social interactions and on building experimental environments that mix real and virtual experiences. She has a book in progress about how we signal identity in both mediated and immediate situations. Professor Donath received her doctoral and master’s degrees in Media Arts and Sciences from MIT, her bachelor’s degree in History from Yale University, and has worked professionally as a designer and builder of educational software and experimental media.