"…" an archeology of silence in the digital age

What does the war in Syria have to do with the privacy debate in Europe? What does NSA mass surveillance have to do with a Chinese Internet café, and where is Cyprus situated in this digital wargame?

On the one hand, we have our own specific views. On the other hand, the forms of expression are subject to a collective political, cultural, governmental and linguistic regime. In order to overcome the forms of attribution, exclusion and paternalism in our own views and expressions, we specifically address the social and cultural mechanisms of exclusion in our art projects. Our projects, such as picidae (since 2007), New Nations (since 2009) and qaul.net (since 2012), have gained worldwide interest by revolutionizing communication conditions. As open-source projects these works uncover forms of censorship of the Internet, undermine the concentration of political power and even resolve the dependency on infrastructure. The tools we provide are used by communities and activists in the USA, Europe, Australia and in countries such as Syria, Tunisia, Egypt, Iran, India, China and Thailand. Even North Korean activists participate.

This talk is a tour d’horizont to the isolated and hidden depths. Particularly in the digital age we usually forget about the exclusion and the gaps because they don’t appear in our worldview. By looking into our communication conditions, we can realize new strategies and ways to reach out to each other.” – Christoph Wachter & Mathias Jud.

Artists Christoph Wachter and Mathias Jud have been paying special attention to the different forms of silence that prevail on the Internet. With their work, they aim to undermine power structures while also developing tools and systems of communication for those in need. They uncover network mechanisms, expose cases of censorship and surveillance, and embrace infrastructural literacy as a response to the dominance of today’s network infrastructures. Minorities deprived of the possibility to connect, people fleeing in fear of being tracked, citizens suffering violent Internet black-outs, as well as users wishing to react to the constant capturing of their data are the ones the artists have been turning their attention to. In areas such as the suburbs of Paris, the island of Lesvos, the cities of the Arab Spring, even the very center of Berlin, they have worked alongside communities and activists to develop independent zones of communication that users themselves can control and sustain. Bringing back to the foreground what the 90s community network pioneers once called the “freedom to connect,” Wachter and Jud formulate possibilities for communication, opposing silence and exclusion.

We would like you to watch this NeMe produced video, presenting Wachter and Jud's talk at the NeMe Arts Centre uploaded on vimeo.com/243806698.
By viewing it here, you accept Vimeo's privacy policy. 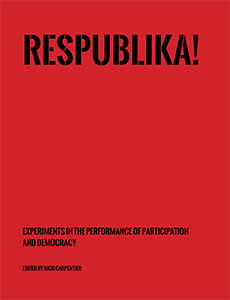 Other seminars in Respublika!