The global financial crisis of the past eight years is heavily impacting most European Mediterranean countries, destabilising not only the symbolic structures of Europe expressed in its initial agreements as unity, stability and equality but also the idea of what the EU is and what it could or should be. There is an observable division within Europe, not only between the Balkan countries and the west but also between north and south, where so called equality amongst nations is resulting in policy decisions which could be argued, favour industrialised members and do not take into account the administrative, financial and specific cultural features of individual European member states. These divides and the contemporary political and theoretical debates around them, form the context for this project, nEUROsis takes a critical look, through art that reflects politically on its own social relevance and engagement at the contradicting values of the EU.

A fundamental European principle is the respect for cultural differences but this fact is in conflict with the harmonisation of laws amongst its member states. The ideological rhetoric by the EU, as expressed in various treaties predetermines the local administrative systems and arguably limits the possibilities of the longevity of the union. Furthermore, the regulations imposed to countries are not always viable in some locales as they emphasise, in the guise of transparency, the technocratic procedures which transformed our systems to technocratic democracies at best or authoritarian technocracies at worst.

In spite of the above, the majority of the European citizens do believe in the EU and more particularly in its currency and soft internal border policies but at the same time admitting that their subjective support is generated by personal convenience.

These and many more issues are often discussed in all levels but viable solutions are yet to be reached so it can be argued that European citizens are living in a state of ‘neurosis’ between the ideals of Europe and the reality of their lives. With this argument, the last ten years have witnessed a remarkable proliferation of platforms for art works usually referred to as ‘socially engaged’ as “artists and cultural agents have begun to claim a place in the public debate about social, environmental and political issues, arguing that artists have an active role to play in society and that artistic creation offers a valid source of knowledge and experience“1House on Fire, sighted 10 Oct 2015.

This project presents the works of artists working in the intersection of art and society adopting socially relevant and engaged approaches to produce their art. The resulting exhibition consists of artworks which not only reveal the problematic nature of non-locally based regulations but also ways by which non-destructive resistance can be expressed. Artists combining critical theory, politics and current affairs question and/or reveal the distraction of our societal structure and work towards trying to safeguard the rights that many of our predecessors have fought for, resisting global powers which favour monopolies but at the same time questioning and re-interpreting the predominant historical legacies siding with Wim Wenders’ caution that “…the most politically indoctrinating thing you can do to a human being is to show him, every day, that there can be no change“2Wim Wenders, The Act of Seeing: Essays and Conversations, Faber and Faber, London, 1997, pp. 52-3. especially when that change, can expand our freedoms.

At a time when images are exhaustively disseminated, “image no longer seems so powerful in itself“3Nicolas Mirzoef, The Clash of Visualizations: Counterinsurgency and Climate Change Social Research: An International Quarterly, Volume 78, Number 4, Winter 2011, pp. 1185-1210, John Hopkins University Press. artists became socially engaged not by choice but a sense of responsibility. As such and echoing Howard Jacobson’s view that “the point of art is to refute whatever it is we’ve made up our minds about“4Howard Jacobson, A Point of View: Art v politics, 2015, sighted 10 Oct 2015.. nEUROsis is an exhibition which rejects conventional aesthetics and invites participation by the thinking public in the process of democratic discourse. The participating artists operate inside and outside institutions, they take risks and are actively involved in trying to bring social change as “wellness of a society depends on the wellness of all its components“5Salvatore Iaconesi, What happened when I open-sourced my brain cancer, sighted 10 Oct 2016..

NeMe, The Visual Sociology and Museum Studies Lab and the Department of Communication and Internet Studies of the Cyprus University of Technology and the Leonardo Electronic Almanac. 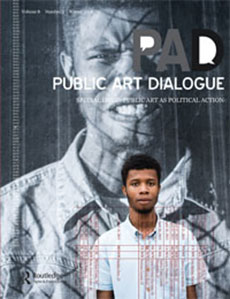