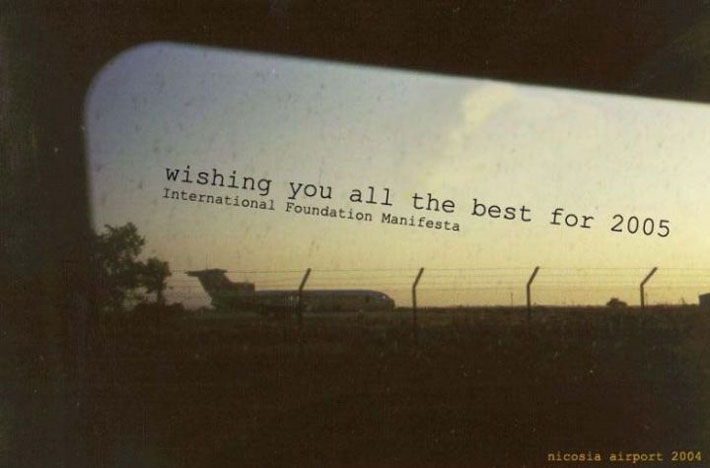 The race for the Green Line as a cultural commodity has begun.

Most of us in Cyprus understand that this division, a legacy which many of us have inherited, confronts us with the residues of an un-welcomed conflict, a time both past and present, of a socio-political madness. ‘Wishing you all the best for 2005’ offered by International Foundation Manifesta imprinted in a moment of nostalgic indulgence upon an image representing this unresolved political and physical division is an act of colonialist madness disguised as cultural liberalism, a liberalism which is willing to submerge and consume the sensitive dynamics of a place in favour of the international cultural object. The “green line” unfortunately still exists as an open wound for all Cypriots. Artists and curators must exercise both sensitivity and caution when using either its imagery or physicality so not to dislocate the space from its inherent political and social urgency and merely exploit it as “cultural capital” for the purpose of self-valorisation.

“What difference does it make to create ten happy islands in a world where everything keeps functioning just like before? In this way the institution is not being attacked. Madness is being recuperated, encapsulated by the system and loses its function to subversive activity.” (Asylum – to dwell in Strangeness by R.D.Laing quoting Dr David Cooper)

Helene Black is an artist and a founding member of NeMe
Image: Christmas ecard from Manifesta Foundation