The Decision and the Gap

“Art is not political owing to the messages and feelings that it conveys on the state of social and political issues. Nor is it political owing to the way it represents social structures, conflicts or identities. It is political by virtue of the very distance that it takes with respect to those functions. It is political insofar as it frames not only works or monuments, but also a specific space-time sensorium, as this sensorium defines ways of being together or being apart, of being inside or outside, in front of or in the middle of, etc. It is political as its own practices shape forms of visibility that reframe the way in which practices, manners of being and modes of feeling and saying are interwoven in a commonsense, which means a “sense of the common” embodied in a common sensorium”.

What future can we determine for a politics of aesthetics following the rationale of this thought of Rancière? Political art, according to Rancière, neither encompasses hidden messages for decoding, nor reproduces social conditions. Political art-all art-creates distance from the very function of message and depiction.

Rancière’s rationale, however, demands of art another type of definition and some shaping. This concerns shaping and defining an alternative re-framing. For Rancière the theme art observes becomes a theme of art, because the way observation is organized alters the observation framework. Behind Rancière’s proposal lies an attempt to renegotiate the concept of representation. An artist has to reshape a thematic in order to produce a work, to distort a view in order to propose another. This conception of art-I suggest-remains constrained by a modernist perspective. An existing, adequately defined, theme will be reconstituted, once it is reframed by the work of art. Yet, doesn’t Rancière, having explicitly abandoned the message and representation, restore the idea of representation via the route of “reframing”? And if we accept this view can’t we add that, rather than rejecting representation, art might be seeking new the specifications of representing? Something remarkable is occurring here, especially if one notes in advance that for any event there is no frame to reframe: every frame always constitutes a new construction of the framed theme. The same action constructs both frame and theme; they cannot be separated from the work ‘itself’.

Might political art’s démarche be an ongoing attempt to organize a declaration? Might abandoning both message and representation, as Rancière proposes, lead to something less ambitious and shallow than a reframing? Might not this obsessive denunciation of representation that Rancière proposes in this extract lead to a certain self-delusion? Does not reframing also constitute a declaration, a depiction or a particular way to re-present? Further more: Reframing remains a momentary explosion, a strong structure occurring after a departing frame is replaced by another, a new proposition that alternates with a given one. Do we then need it? If political art’s démarche is not a declaration, what it could be? What type of unresolved issues could it bring to the fore? How can political art refuse to pronounce a single dictum? Could even an unresolved démarche be a declaration of sorts? Let’s consider art in some of its latest “archive works”. Finally, would it not be possible when dealing with these archive art works to, for once, at least sidestep the irritating notion of a reframing’s proposed replacement of a given frame? As a working hypothesis, let us accept that the frame is the theme: How can a stable frame direct an unstable form? Or what sort of unstable declaration can a stable frame propose? Given the interest in the frame and reframing, we could remain for a little while longer on the art of archiving. An archive is a frame.

A frame, a frame’s construction and the archive’s idiom, as the idiom organized in between archive entries, have a significance that has not been sufficiently observed. The frame organizes a thematic area, not centred around a preconceived concept that dominates the area, but as the outcome of the conjunction of diverse fragments. The theme is constructed as an accumulation rather than as a concept. A hypertrophied art decision relies on the fact of re-proposing and stabilizing a “new” view of the theme instead of including it in another already existing viewing place, of unifying a single logic of approach instead of disseminating many.

A particular condition characterizes the task of presenting an archive in the sphere of ‘art’. From Modernism on, when referring to a ‘work of art’ or a ‘work in the field of art’, we mean something that violently disrupts its reference area. A work is produced at the very moment a disruption disturbs the homogenous field it ‘belongs’ to. And the work is perceived as a disruption of the sphere’s homogeneity in every different field. At this stage the work crystallizes a formulation. The decision for the work of art is still understood as the act of an authentic moment.

The homogeneity of the field of reference in which a work of art takes place is constructed by the gaze of the Other. In other words, ‘homogeneity’ is recognized as an existing, constructed gaze; a ‘rupture in homogeneity’ names the active awareness and an action when confronting the mistaken gaze of the Other is considered. The rupture produced by a work of art unfolds as a fissure in the Other’s gaze.1The hypertrophic nature of this split comes with a signature attached: art is identified with the name of the person who splits. Thus, the history of art is identified with a series of signatures. In a modern perspective, we are accustomed to perceiving the poetic work as just such a decisive rupture2This split, which s not mentioned here as an act to be avoided, is achieved through the hypertrophic decision technique..

Just as in modern art, a political utterance is also achieved through rupture. A political proposition is formulated by a rupture. Here, too, an utterance is perceived as action against a homogenous field, viewed one-sidedly. A decisive rift through any normality runs through the organization of political discourse. Normality is inauthenticity. Thus, political discourse needs the inauthenticity of social life’s constructed zones to create an authentic rift in the latter’s body. The way one responds to the inauthentic field would be the only way to demonstrate the authenticity of the rift.

Thus, a political utterance may be read as a rupture or disturbance of a given field. The political rupture bypasses all other ways of regarding a theme in order to insist on one. And a political decision (for utterance through rupture) resembles a poetic decision. Political and poetic decisions alike require the hypertrophy of a viewpoint.

the gap between entries

Despite strategies that seek to suspend the hypertrophied viewpoint (and which characterize a parallel course in the history of thought and art), the following description can safely be put forward: after the history of these strategies, the hypertrophic decision, which contests, on its own, its entire field of reference, is neither annulled nor interrupted. Post-modern hypertrophy functions simply as if the hypertrophic decisive construct were, temporarily at least, the sole rational view. The only way to cancel hypertrophy is either through ‘non sense’ or through its ephemeral duration.

Thus, the contemporary work of art and the contemporary political decision both rely on temporarily simulating their classical, modern versions. Without an ephemeral ‘as if’ political risk is lost, the same way the significance of every contrast is lost, along with poetic creativity as well-if we are interpreting these concepts, at least, in the classical sense. All political risk and poetic creation are located in the distance from faith that very ‘as if’ offers. Post-modern politics and artistic decisiveness are performed as a role, demonstrating a ritual, theatrical character: there exists no sphere of political discourse where works of faith are undertaken; rather fictional simulated acts are the rule: as if certain legitimate hypertrophic denials could counter organized social forms of the Other. Political action and artistic production rely then, on some sort of theatrical impersonation of the hypertrophic decision.

The archive works show a possible future and a decay of this specific decision rationale. An archive includes different contradictory aspects of anything it presents. The archive immediately marks the value and the limits of anything included in it. Living in an archive world (as we might describe the one we live now), we may start thinking about the condition of archiving itself: an archive is a promising possible form capable of both unifying and sustaining dispersion for a future politics of art and for another distinct art of politics. An open question emerges, requiring answers that could form yet another archive. How can we formulate statements through archives? How can we propose action in the already uncertain and contradictory field, composed by different archive entries? What is the future of conflict in a world of archives where every statement becomes just another entry? The juxtaposition of entries annuls the power of contrasts within the archive.

A previous version of this text was first published in Greek under the title “Nature Morte Politique” in 2007. 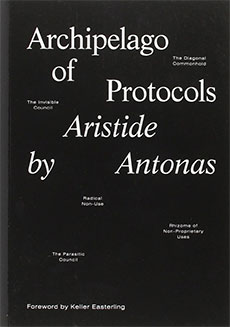