NeMe invites you to Video March, a series of workshops, discussions and screenings programmed for the NeMe Arts Centre.

“High-pitched sounds killed everyone on earth known to be an enemy of human freedom.” (from the 1957 science fiction film The 27th Day)

This two-part series is structured as a screening/discussion/workshop. It will explore both the immediate sparks and the deep-seated underlying causes of the historically unprecedented global demands in recent years for direct participation in democratic processes at all levels of common existence, from the bottom up. Each of the programmes focuses on the visual dynamics of a specific dimension of this world-wide outpouring of dissatisfaction (not to say disgust) with politics as usual. These events are intended to show how audiovisual representations can and do make a uniquely forceful and thoughtful contribution to a common understanding

Tough, confrontational, often emotional, these films butt up against the limits of representation and defy the conventional consolations of realism. Taken together they document an exemplary range of resistant tactics in contesting authority, representational (as opposed to direct) democracy, and the relation between the state and capital.

The paradigmatic status of the sans papiers, the migrant, the refugee – stateless, stripped of civil rights, always in a limbo of illegality – traverses the territories of these compellingly unsettling films.

Sherry Millner and Ernie Larsen are the co-creators of the interventionist video project State of Emergency, collaborating with 17 artists in a silent shout-out against U.S. invasions of the Middle East, and the consequent assaults on what remains of tattered democracy amid the globalized reign of neo-liberalism. Together they have also produced several situationist films, including Partial Critique of Separation, two anti-documentaries redefining criminality, and a series of semi-autobiographical videos focusing on the authoritarian structures indispensable to capital.

Professor Sherry Millner (College of Staten Island, CUNY) was the initial Chair of the Media Culture Department. Millner’s projects have been described as radical interrogations of the dynamics of genre and communicative systems, while overturning remaining distinctions between public and private. Her many films and videos have been exhibited at film/video festivals throughout the U.S. Europe, Australia, and Asia, at major museum exhibitions, including two Whitney Biennials, and is distributed by Video Databank. Her photomontages and photo-text pieces have been published in many journals including Heresies, The Independent, Social Text, Public Culture. Beginning in 2006, she initiated a series of curatorial projects in film and video including State of Emergency (first iterated as a public video projection), Border-Crossers andTrouble-Makers for the 2008 Oberhausen Film Festival, Reclaim the Future at the 2009 Subversive Film Festival in Zagreb, and a programme for the Visible Evidence Conference in 2011. She is currently co-producing Disruptive Film & Video: Everyday Resistance to Power, a new history of radical/ experimental short film and video, as a four-DVD set to be distributed by Facets MultiMedia. Her collaborative photo-text series, Notes from Europe, initially available on the Social Text website, was published in book form as Capital’s Greek Cage by Autonomedia in 2013. Her video Rock the Cradle (2013) has been exhibited in Barcelona, in Thessaloniki, Greece, Pori, Finland, Belgrade, Serbia, and Chicago,Illinois (at the It’s the Political Economy, Stupid exhibitions), and in Glasgow and Edinburgh, Scotland, Croatia, and Cyprus (within the Economy exhibitions). Excerpts of her ongoing photomontage series No Ventilator Included were published in Printed Project (Dublin, Ireland). Her work is featured in such books as The M Word, Feminist Art and the Maternal; Space,Site, and Intervention: Issues in Installation and Site-Specific Art; in Digital Desires; and in Re-Framings: New Feminist Photography. In addition to festival awards for her films and videos, she has been the recipient of residencies, and grants from NYFA, NYSCA, the Jerome Foundation, Long Beach Museum, the Ucross Foundation, Can Serrat, Babayan Culture House, and Light Works, among others.

In addition to many film and video collaborations with Sherry Millner, Ernest Larsen writes fiction and media criticism. His criticism has been published in The Nation, Art in America, The Village Voice, Art Journal, The Independent, Exposure, Transition, The American Quarterly, Jump Cut, and Arena, along with essays in a number of anthologies. He wrote a book-length study of the film The Usual Suspects which was published in the British Film Institute Modern Classics series. His novel, Not a Through Street, was nominated for an Edgar. Also a scriptwriter and contributing producer for several PBS series, he has received grants, residencies, and awards from the Jerome Foundation, Paul Robeson Foundation, MacDowell Foundation, Blue Mountain Center, Gunk Foundation, and the Blumenthal Foundation. His collaborative video projects have been exhibited and won awards at major festivals throughout the world (London, Sydney, Berlin, Barcelona, Amsterdam, Dallas, Los Angeles, etc.) including two Whitney Biennials. With Sherry Millner, he has co-curated film/video series for the Oberhausen Film Festival and the Subversive Film Festival in Zagreb. He co-produced the film projections series State of Emergency and in 2013 co-curated a film series for the Flaherty Foundation, at Anthology Film Archives in New York, Global Revolt.

Video is the medium is the first part of a research project initiated by NeMe which aims to collect and collate art videos by Cypriots for the Rose Goldsen Archive, Cornell University.

This one day event, consists of an open forum at the NeMe Arts Centre consisting of short talks by academics and practitioners aimed to establish a critical discussion for Cypriot media arts in general and video art in particular. There will also be a screening of a selection of videos.

To date, there are no Cypriot video archives available for public access and research. The focus of NeMe’s investigation is to examine the present environment of video technologies including their degree of outreach or inversely, restrictions, which preclude many Cypriot artists from using more interactive technological innovations, and remaining within more traditional modes of production. We hope that this open discussion will advance the importance of politically and socially engaged art which addresses the present socio-economic and political concerns. Cyprus does not have a constructive and expansive contemporary cultural agenda which could become a platform for discussion and interpretation by cultural producers. Instead, it remains for individual artists to express social concerns as a personal manifesto in search of a potential dialogue. This has resulted in disparate efforts, dislocated from a supportive cultural policy and alienated from a shared discourse.
Furthermore, the absence of a coherent well informed critical analysis of video and new technologies prevents recognition and contextualisation of this medium within the local reference and beyond.

As such, this project is an investigation to locate the conditions under which it is possible to collect, collate, archive, exhibit, speak and write about new media in Cyprus and attempts to chronicle how video and computer media have been historically used from early magnetic tapes to the more recent digital media and web applications.

Most sessions will be in Greek 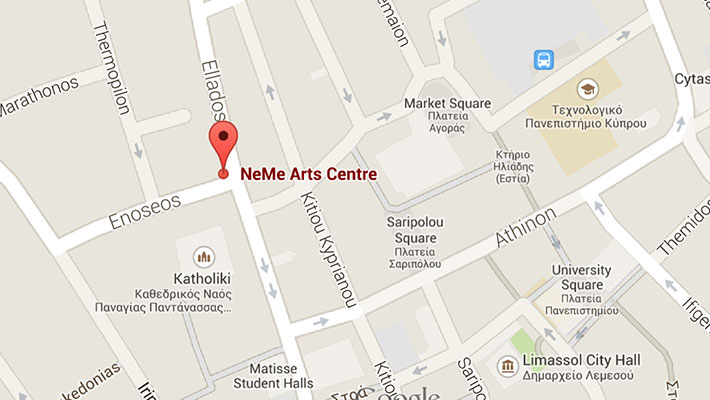